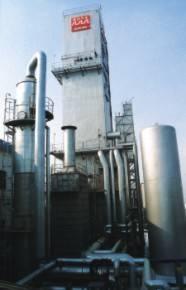 Delivery Time : within 3 working days(depends on your quantity)

Product Description
Flow briefly: The air inhaled from the atmosphere enters the Filter into the air compressor after filter, after cooling compression level, going into the pre-cooling system and separate condensate water in water separation, then entering absorption tube in the purification implement to remove water,carbon dioxide and most hydrocarbons, and so on. The purified air enters heat exchanger in the cold box in fractionating tower, then going for heat exchange with reflux oxygen, nitrogen and polluted nitrogen, then part of the air was throttled to the lower tower and the other drawn from central part of the heat exchanger going into Turbine Expansion Engine for expansion refrigeration, then the low-temperature air after the expansion enters the up tower(or some of it enters the polluted nitrogen pipeline and released after reheated). In the low tower, the air is separated elementarily, the liquid nitrogen on top, and liquid air at bottom. The liquid air is drawn out from the bottom of the low tower into the central of the up tower passing though the cooler. After full distillation for the air in the up tower, the liquid oxygen is drawn out as products from the condensate evaporator from the bottom of the up tower, then the oxygen products is discharged outside the cold box of the fractionators after reheated by the heat exchanger. As the different users, after cushion by the airbag for storage, the oxygen product is sent to users by the technique tube after pressurized by the oxygen compressor or filled into the oxygen cylinders for sale. The nitrogen is drawn out from the top of the up tower going through liquid nitrogen and liquid air filter subcooler, heat exchangers reheated being discharged outside the fractionators or sent to users by the technique tube after pressurized by the oxygen compressor or filled into the oxygen cylinders for sale. The polluted nitrogen is drawn out from polluted nitrogen mouth, reheated by heat exchanger and or as the purification implement rebirth gas. Flow characteristics: * Adopting the process of full low-pressure purification implement for purifying, Air bearing Turbine Expansion Engine for refrigeration, Aluminum plate type finned heat exchanger for heating exchange, greatly enhanced the stability, security and reliability of the device for running. * Fractionating tower used aluminum structure. The fractionating tower has a higher rate of extraction for oxygen, nitrogen, which has a more space for yield adjustment. * Less support unit, so less covering area. Easily and conveniently to operate, it has been marked by a number of on-line monitoring instruments for types of datas, thus, the operators can be significantly reduced. Note: 1. Nm3 / h refers to the of production at 0C, 101.325KPa 2. Calculation of liquid production is converted into gas production 3. Cycle equipment running more than 12 months is the interval time for the two largest heating time for fractionating tower 4. Unit energy consumption of oxygen is calculated by axial ratio of the air-compressor. 5. the above table is only for selection reference of customers. Medical Oxygen, high-purity nitrogen, high-purity oxygen equipment and the equipment can be changed according to customer’ requirements for specific design.

Thank you! Your message has been sent to the following suppliers.